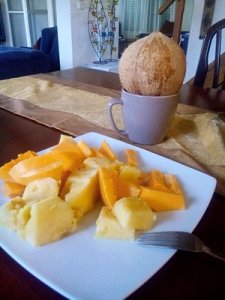 Having my last tropical breakfast in Port Vila.

I’m sitting here at the airport in Port Vila, Vanuatu, waiting for my flight to Auckland. It’s going to be 15 degrees in New Zealand. First thing to do on arrival: buy some shoes.

It’s been one day and 13 months since I arrived in India to join a yacht as crew. The idea was to sail all the way to New Zealand. I jumped ship already in Malaysia and since then it’s been a wonderful tropical adventure through Myanmar, Indonesia, Papua New Guinea, the Solomon Islands and Vanuatu. I will miss most things, but most of all the generous people, thirst quenching coconuts and “drinking” pineapples and mangos!

The amazing crew of Liberty and me inexplicably choosing to put up with her captain.

Traveling with a spitting Swede, an Argentine and an Italian in Myanmar.

Learning Tok Pisin by studying the lyrics of a PNG pop song called Paper Beer (a euphemism for weed) together with Daisy while her mother was making saksak pancakes.

Traveling on Yangon’s suburban train. It’s like a National Geographic film right out of the window.

The food and scooter rides I shared with Nicky in Penang, Malaysia.

The people of Adonara, Indonesia that I kept bumping into all the way to Papua New Guinea.

Chasing a crocodile through the grass.

Taking a shower break in the middle of a bus ride in Papua New Guinea. I guess the driver was sick of the smell. The shower was actually a river.

The volcanoes of Flores and then relaxing and snorkeling on Kanawa Island with certain funny Australians.

Riding a scooter all over Flores listening to this song:

Waiting the whole day for a ship while talking to a 98 year old man of the Solomon Islands.

Waiting impatiently for that meditation course to be over and then enjoying the benefits of being able to visit the incredible Shwe Dagon pagoda in Yangon many times without paying.

Flying out of the back of a truck on the way back from Mount Tambora.

A naked Papuan man standing next to a fully covered Javanese woman in Wamena, West Papua. The incredible injustice there!

Lying on the grass somewhere on Ambae island in Vanuatu and reading my kindle, having to flip back to the page I was reading every time a fly landed on the touch screen.

Bouncing up and down, left and right on Myanmar’s trains for days.

The hospitality of Papua New Guineans.

Spending days talking about war, peace, mining and Australia with one of the former top men of the Bougainville Revolutionary Army.

Sweeping spiders and burning scorpions before going to sleep.

Visiting restricted Indawgyi Lake in Myanmar and walking to a pagoda in the middle of it.

Making my own way to the top of Mount Wilhelm – I almost saw snow for the first time in over two years (if we don’t count last summer in Iceland).

The Melanesian people’s incredible laughing that invariably ends with a high pitched uuuuuu, aaaaaaa, iiiiiiii, waaaaa, uwiiiiiii… It is sometimes annoying but I’ll still miss it.

Kayaking over a blue hole, paddling up rivers and over lagoons and hiking up volcanoes in Vanuatu.

Every boat, bus, truck, canoe, bike and plane ride I took. The following sums up transportation in the Pacific:

I am also proud to announce (I know pride is a deadly sin but I couldn’t help it) that apart from a couple of fits in Myanmar, I did not get diarrhea at all on this trip, including in countries like India, Indonesia, Papua New Guinea, Solomon Islands and Vanuatu. It either means that these countries have been horrendously underrated when it comes to hygiene or that I’ve already gone through and become immune to all 389 causes of traveller’s diarrhea. Time for me to go cycle around New Zealand!