When I was in Vanuatu last year, I traveled from Ambae to Epi on a 9-seater Britten Norman BN2 Islander operated by Belair. The flight path passed right over the island of Ambrym. The pilot politely leaned the plane over to one side as we were passing over the active smoking crater of the famous volcano. You can see the view at around 1.40.

END_OF_DOCUMENT_TOKEN_TO_BE_REPLACED

I finally got around to making a small (10 minute) video about the Crocodile Festival (Pukpuk Show) in Ambunti, Papua New Guinea, August 2014.

I also included it in the original blog post:

I just came back to Europe from New Zealand, Hawaii and California, where everyone was raving about Iceland. Icelanders seem to have invested a lot in marketing their island. Since Iceland’s experiments in banking ended in a fiasco, tourism took over as the next big thing. It’s not hard to attract people to Iceland – it is easily one of the most beautiful places on earth and the culture is OK too:) Tourism always means easy money for some locals, but, hey, that’s not MY money and let it not be yours either.

Landmannalaugar is very popular and crowded. Lónsöræfi is similar but a lot quieter.

First, for those who don’t know: I spent six full years in Iceland plus a few summers and I know the country inside out more or less. On the other hand, I haven’t been there for a year and a half now but my information is mostly up to date. I am going back this summer and I am excited.

Iceland is generally quite expensive and inaccessible and I have been thinking for a while about writing something for the budget traveler so here it is, at the start of the season. I hope it’s going to be useful and its also going to generate some clicks on my blog this summer:) If you are looking for 5-star hotel recommendations, you are going to be disappointed. If you are looking for a million star hotel (read camping) recommendations, read further.

In Iceland you can walk on glaciers but don’t do it by yourself unless you really, really, REALLY! know what you are doing. People (read Germans) have died trying this on their own. If you save enough money using my tips, go on a guided tour for this.

First of all, to get an idea of how I like to travel –> I believe the whole world should have allemansrätt. Allemansrätten (“every man’s right” in Swedish) is something typical of the Nordic countries. Namely Sweden, Norway and Finland (not the Åland islands though – shame on you, Åland!) have this type of law that says that every person has the right  to roam, camp and – very importantly – pick mushrooms and berries as they please, even on private property (with few restrictions). In Iceland I have only seen some edible mushrooms around the university campus, but don’t eat those while hitchhiking please! Save them for when you are camping and need to talk to the flowers! END_OF_DOCUMENT_TOKEN_TO_BE_REPLACED

Exactly 200 years ago, as I am writing this, the most powerful volcanic eruption in recorded history had just started, blowing almost 2,000 meters off the top of a mountain called Tambora on the island of Sumbawa in Indonesia. It was a devastating event for whole world. The eruption caused the “Year without Summer” in the northern hemisphere when it snowed in London and New York in July and crops failed all over Europe, North America and China. There was famine in Switzerland (they must have cut down on the fondue over there). The more indirect effects include the birth of the Frankenstein story and Mormonism, some pretty works of art, real estate bubbles, cholera going global and Arctic exploration. 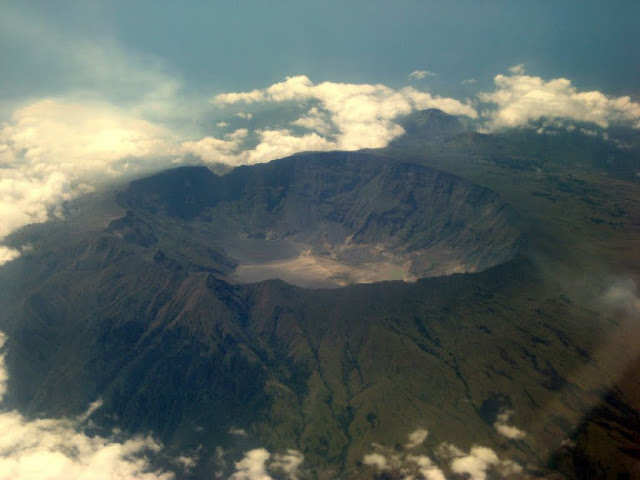 On April 10, 1815, Tambora woke up, blew up and completely destroyed its immediate surroundings. Whole cultures were wiped out, including the Tambora people and their Tambora language that was the easternmost non-Austronesian (Papuan) language at the time (little known fact, you are welcome!). Alas!

END_OF_DOCUMENT_TOKEN_TO_BE_REPLACED

I had a rest day in Waipu with my warm showers hosts because of the bad weather that was passing over New Zealand. That day it rained and the wind was too strong to even walk, let alone cycle. The next day the rain had stopped but the wind was still there. I had planned to continue north along the east coast but now the wind was coming from the east so it made sense to go west. It didn’t take long to make the decision and I was on my way to the west coast.

END_OF_DOCUMENT_TOKEN_TO_BE_REPLACED

Starting a long cycling trip (actually anything longer than a few hours) is not easy on the mind or the body. After buying and preparing Traicho Junior (the bicycle) in Auckland, I was ready to leave on the slightly overcast December 11.

Auckland is a city made for cars but there are some bicycle lanes. Getting out of Auckland directly north though is a bit complicated, so I decided to go west first and then north. And to avoid breathing all the car exhaust, I took the suburban train for 6 NZD to a station in the west. Bikes are allowed on trains but not on buses in Auckland.

In four days I did 224 km over quite a few hills and some rain.

END_OF_DOCUMENT_TOKEN_TO_BE_REPLACED

On the last day of November, I found myself in Auckland – the largest city of New Zealand. This was my second time here. The first time was six years ago on my round the world trip when I was too lazy to write a blog. However, back then I wrote an article about Auckland (for money), whose main purpose was to explain how the North Island of New Zealand looks like a fish and Auckland would be its anus…

Auckland is not exactly a Manhattan but coming here after five months in Melanesia it felt like a super busy place. The first day I had problems crossing streets and I got completely lost in a shopping mall – took me about an hour to find an exit. It was refreshing to be in a place where I could be anonymous, but then noone would respond to my hellos on the street.

I wanted to buy a bicycle in Auckland and then spend the next few months (as long as New Zealand’s summer weather allowed) cycling. Back in 2008 I travelled mostly on the South Island (including by bicycle) and now I wanted to concentrate on the North Island.

Having my last tropical breakfast in Port Vila.

I’m sitting here at the airport in Port Vila, Vanuatu, waiting for my flight to Auckland. It’s going to be 15 degrees in New Zealand. First thing to do on arrival: buy some shoes.

It’s been one day and 13 months since I arrived in India to join a yacht as crew. The idea was to sail all the way to New Zealand. I jumped ship already in Malaysia and since then it’s been a wonderful tropical adventure through Myanmar, Indonesia, Papua New Guinea, the Solomon Islands and Vanuatu. I will miss most things, but most of all the generous people, thirst quenching coconuts and “drinking” pineapples and mangos!

END_OF_DOCUMENT_TOKEN_TO_BE_REPLACED

One of my favorite parts of the Swedish book “The Hundred-Year-Old Man Who Climbed Out of the Window and Disappeared” by Jonas Jonasson (the loose translation is mine). It is quite funny and I highly recommend it. It is certainly not only about Indonesia (I have to say that before some Indonesian official declares the poor author persona non grata).

My first two months in Indonesia started in Bali and ended in Bali. Flights to Bali are the cheapest.

Most tourists in Bali stay in an area known as Kuta (best avoided!) and nearby Seminyak and so on. These are all places close to the airport and it is one of the world’s worst examples of what mass tourism can do to a place. South of Kuta and the airport there is a peninsula with a few incredible beaches like this one.

On your way to the beach you will be greeted by many signs (did I mention how well organized Indonesia was). This one is my favourite. I wonder if they have cameras in there. Or maybe someone goes after you and tries to sense the smell before they do the billing? How much would they charge for a quickie? So many questions – so few answers!

Bali is certainly a magnet for tourists worldwide. It is quite beautiful indeed, although END_OF_DOCUMENT_TOKEN_TO_BE_REPLACED

Wowair of Iceland made it to the news by offering cheap flights between New York/Baltimore and Iceland/Europe. From $150 one way between the USA and Iceland and from $195 one way between the USA and Europe. I had been waiting for a while for them to start flights to North America. Wowair’s predecessor, Iceland Express, used to do the same run but then stopped operations. Still, I am not holding my breath since those promotional fares are usually quite limited and the normal fares are nothing to write home about, but they have regular promotions so it’s good to subscribe to their newsletter.

Wowair’s flights are not such a big deal compared to Norwegian’s regular fares of around $200 one way between California and Scandinavia on the Dreamliner.

Not too bad for $200 one way, FREE WIFI INCLUDED!!! on Norwegian Air.
map from gcmap.com

Norwegian’s long-haul flights have already been operating for a while. Norwegian has been END_OF_DOCUMENT_TOKEN_TO_BE_REPLACED